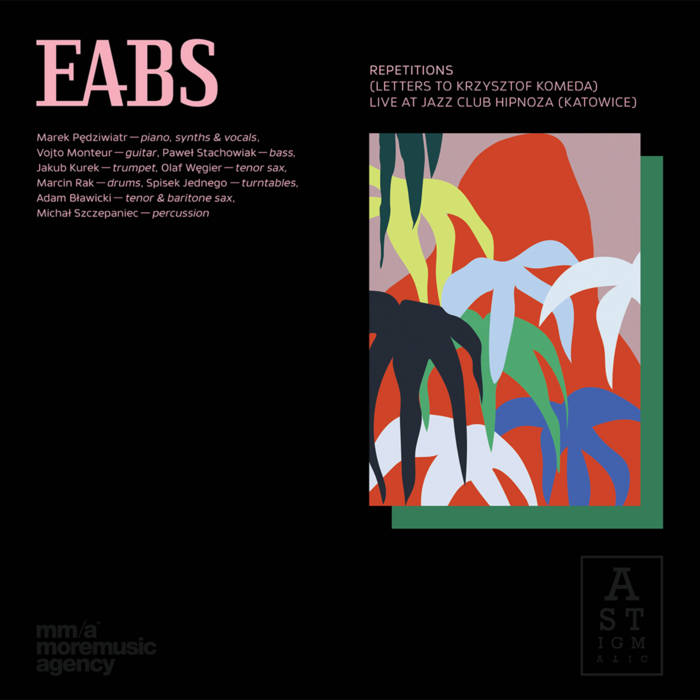 btp1524 If you're a fan of Komeda's Astigmatic and a heavy Hip Hop head (like me) this is a must have!

At the invitation of Tauron Nowa Muzyka Katowice festival, Wrocław’s Electro-Acoustic Beat Sessions septet releases a special concert album! A limited vinyl record contains a full performance which took place at Jazz Club Hipnoza last December. The band continues the tradition of Polish Jazz school whilst keeping up with the world renaissance of the genre.

The debut album was surely quite an entrance into jazz scene. EABS have delighted both listeners and critics with their “Repetitions (Letters To Krzysztof Komeda)” album which creatively develops the compositions of the most outstanding artist in the history of Polish jazz. Dozens of reviews have been written while the album has made it to most of the yearly recaps, winning numerous awards. It’s “the best thing that’s happened nationwide to Krzysztof Komeda’s legacy since Tomasz Stańko’s Litania”, as Bartek Chaciński’s noticed in his review for Polityka.

The grand entrance has resulted in the proposal to release a concert album. EABS have made an effort to present Komeda’s compositions in yet another captivating way. At times they would make them more lirycal and at times more avant-garde, depending from the venue and the audience. In mid-December 2017, at a special invitation from the creators of Tauron Nowa Muzyka Katowice Festival, the band gave a performance which was being recorded. It was their 22nd performance after the May premiere of “Repetitions…”. All the experience they had gained during the tour resulted in an unforgettable concert at the Jazz Club Hipnoza in Katowice.
“It turns out that Krzysztof Komeda’s finesse, once equal to Miles Davis’s modality magnified in Poland by Andrzej Wajda and Janusz Morgenstern, is perfectly understood by the EABS crew. Normally, a judgement like this can only be formed after a live performance, whereas in this case certain magic took over both the audience and the musicians from the start. It wouldn’t happen if it wasn’t for a well-oiled machine that EABS had become before December 2017” – to quote Michał Margański, Polish Radio Three.

The LP with the studio version of the album is sold out and, according to off-the-record information, is not going to be repressed. However, thanks to the cooperation of More Music Agency, organizers of Tauron Nowa Muzyka Katowice and Astigmatic Records, EABS’s publishers, band’s concert LP will be available for sale. This 180 gram double LP limited to 1000 copies is titled "Repetitions (Letters to Krzysztof Komeda) Live at Jazz Club Hipnoza (Katowice)". In order to make the performance even more energetic, the band played along with guest musicians and decided to exclude ballads from the setlist, supplementing it with two previously unpublished, over 10-minute suites - "Kraksa" and "Svantetic".